Fingernails of Terror ... by C.L. Beck 
One Halloween morning, I decided to wear ghoulish fingernails to work. They had an imprinted skull and crossbones that looked awesome.

Life proceeded routinely on the job—until I needed to blow my nose. And then one of the falsies—you’ll remember we’re talking fingernails here—got in the way and I blew the nail right off.

A co-worker laughed so hard she choked on the pumpkin cookie she was eating and left the room. Probably to search for someone with shorter fingernails to give her the Heimlich.

I should have known I was cursed, but never having worn fake nails before, I had no clue. All I knew was I couldn’t blow my nose in public.

Off to the ladies’ room I went. Once inside, I unwrapped a wad of tissue paper, brought it quickly to my face … and stabbed one of the fingernails up my nose, causing a nosebleed.

Back to the office I went, head tilted backwards to stop the bleeding, hands pointed down to avoid poking anything. At my desk, an itch developed on my neck. Forgetting that I wore projectiles on my fingertips, I scratched. A nail flipped off and flew down the back of my shirt—a shirt I couldn’t pull out of my pants because it would pop off the remaining fingernails.

One of the gals came over. She untucked my shirt and shook the bottom of it, trying to get the nail to fall out. I hopped and shimmied like a skeleton hanging from a tree on a windy night, but it refused to budge.

Laughing, she said, “You’d better go to the ladies’ room to get it out.”

Back to the powder room I trudged. In there, I realized I couldn’t take my shirt off without giving myself multiple body piercings. After twisting like a contortionist, and explaining to every woman who came in that I was not on drugs, the thing finally fell out. I’d have tucked my shirt back in, but was afraid another fingernail would fly off and go down my pants.

Back to the office I scuttled, hands pointed downward and shirt tail hanging to my knees. The gal who’d tried to help said, “Don’t you know how you do this?”

“What? Tuck in my shirt while wearing fake nails?”

She handed me a small tube. “No, how to put on false fingernails.”

Super Glue. That’s how you do it? Silly me, I thought you used the adhesive strips that came in the package.

I wasn’t certain if I was being conned and didn’t relish the thought of wearing super-glued orange and black fingernails until I was 90. I decided to glue only the two most troublesome ones. Not wanting to risk droplets on my desktop, I sat and held my hands over my legs. Sticky liquid dripped everywhere, and after almost gluing my knees together, I finally managed to get the two nails on straight.

Everyone went back to work and an hour later, a customer needed help at the counter. I walked over. We completed the transaction and he handed me the money. I reached for it—and stabbed him with my fingernails.

I apologized. I told him I would have removed them but two were super-glued. And they would probably only come loose by some means of mechanical separation that would include a tractor, heavy chains, and the loss of two of my real fingernails.

Thank goodness it was almost time to go home. I walked back to my desk and for the safety of the customers, stayed there until closing.

That night, I managed to get all the fake nails off except for the two that were held fast by glue. The same glue—I now remembered—that was advertised as able to hold a bowling ball to the ceiling.

However, the nails did glow nicely in the dark. Eventually I remembered that alcohol was a solvent and managed to remove them before Christmas.

I’ve learned my lesson. No more fake fingernails for me. This year as part of my costume, I’m going to try false eyelashes instead … nothing could possibly go wrong with them.

What's playing in my head: The Monster Mash by Bobby "Boris" Pickett.

Today's blog was sponsored by YourLDSNeighborhood.com. Please show your appreciation by returning to and browsing through the Neighborhood. It's a great site to visit!

And while you're there, subscribe to their fantastic newsletter. In addition to being able to shop in the virtual neighborhoods, the newsletter brings you articles, products, services, resources and interviews from around the world—all with an LDS focus. Look for issues delivered to your email inbox.

Neighborhood Newsletter Subscriptions are FREE, and joining is easy.


THIS WEEK'S CONTEST: I'm giving away two really fun, autographed books! I love both of them and wish I had my own copies, but maybe Santa will bring them for Christmas. (Are you reading this, Santa? :) 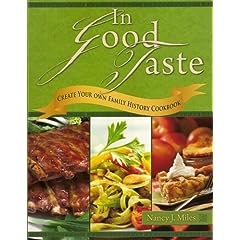 If you don't win, you can always order In Good Taste at Amazon.com (click here). You can also visit Nancy at (click here) www.NancyMilesInGoodTaste.com.
--

2. The A-MAZE-ing Book of Mormon by Arie Van DeGraaf is a super fun children's activity book. The illustrations for the mazes correspond to short stories from the Book of Mormon. If it hadn't been for the fact that I told Arie I'd announce his book as a giveaway, I'd have given the book to my grandkids. I know they'd love it. Thanks go to Arie for donating the book.

If you don't win, you can always order The A-MAZE-ing Book of Mormon at DeseretBook.com (click here) . You can visit Arie at Mormon Cartoonist (click here).

How to Enter: Leave a comment on this blog stating which book you'd like to win. Contest ends Friday, Oct 23, 2009 at midnight.

*Winners will be announced on my blog the upcoming Monday, Oct 26, and will have 48 hours to contact me or ... sorry ... but another winner will be chosen. Email me at cindybeck(dot)author(at)yahoo(dot)com.

(My family members are encouraged, enticed, and eligible to comment on my thoughts, but unfortunately, are ineligible to enter the contests.)

Too funny! I love that you're brave enough to try new things--like "falsies"--even knowing they usually cause you trouble.

PS I'd love to be entered in the contest, but you can leave me out. Don't coauthors sort of count as family? Plus, I'll be giving away the same cookbook in a few weeks. =)

Hee! Hee! Cute story. I don't need these books because I'm doing reviews on my very own copies. :) But I had to read your spooky story!
Congrats on getting 2 stories in the Christmas book--did you tell me that or have you been keeping secrets!!?

Lol lol, thanks for giving me first laugh of the day. lol lol I have a very visual imagination and was sitting here laughing at all the happening. Thanks Cindy. I'd enjoy In Good Taste. Have a good day.
Carol L.
Lucky4750@aol.com

What a funny story! :-D I remember my fake nail days. Glad I don't do THAT anymore. What a pain in the arse to go every 2 weeks to have them done - and it was even free!! My GF was a beautician. One just gets tired of the maintenance, which really is quite ridiculous. I love being a grungy country gal now.

In Good Taste -- most definitely. I can always use more good recipes!

I love them both! I guess if I had first choice, I'd choose the BOM maze book. My kids love mazes!!! But I'd also love the cookbook. Hmm . . . such a difficult decision!

PS - Thank you so much for the COC book! I'm so excited to give it to my friend who just had a double mastectomy.

Oh, really. Your story is too funny. Thanks for sharing and thank you for commenting on my 72 hour kit post.

Funny! Done most of those things myself. :) In fact, I have Halloween nails right now, with a spider and web on one of them. And I broke the thumb nail this morning so it looks really weird.

What a funny story. You've now given me ten more reasons never to wear fake nails (or anything else for that matter.) Thanks for the laugh.

Just had to say congrats on getting this in the newsletter! What a fun story! :)

Hilarious! I knew there was a reason to avoid fake fingernails. Good luck with the eyelashes :) Can't wait to hear that story. As far as the books, my daughter already bought the maze one, and I love cookbooks, so . . .

I wanted to check all three boxes. I really needed this laugh today. Thanks. I'd love both books. I'll let you choose if I'm lucky enough to win two things in the same week.

Too funny, Cindy. I went to buy fake lashes for a play once and as I was walking away the lady at the makeup counter said,"fool 'em all honey." Weird.

The recipe book would be on my wish list, should my name come up in your drawing.

Loved the funny story. I would have the same problems with nails. Just can't handle the pressure. Thanks for a fun laugh. Please sign me up for the Book of Mormon Maze drawing. Thanks.