Thought you'd like to hear this exciting news from my friend and fellow author, Tristi Pinkston....

Author Tristi Pinkston is excited to announce the release of the third novel in her Secret Sisters Mysteries series. 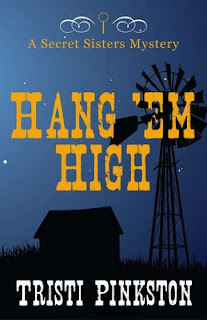 Titled Hang ‘em High, this novel takes place on a dude ranch in Montana. When Ida Mae’s son invites her to come for a visit, of course she brings Arlette and Tansy along with her. They are expecting to spend the week looking at horses, avoiding the cows, and making amends in Ida Mae’s relationship with her son. What they don’t expect is to be stuck on the ranch in the middle of a blizzard and to be thrust headlong into the middle of a mystery.
***

Help Tristi celebrate her new novel in two ways. First, come participate in the two-week-long blog contest, where you can win a book nearly every single day! All the details are up on Tristi’s blog.

Second, come to the book launch!

You are invited to an

This is one book launch event

you will not want to miss!


Today I'm writing about those hair-raising events that happen to all of us in life ... tornadoes ... earthquakes ... haircuts.

"Hey, cat, what are you thinking?" I asked. In psychiatric terms, talking to a cat has a name, but I forget what's it's called. Probably Alzheimer's disease. Nonetheless, in small towns people look more favorably upon the uniqueness of each individual's quirks, and so my neighbors don't even comment about my habit of talking to critters.

At least not to my face.

But ... I digress. I waited, but the cat didn't answer. Instead, she gave this little hop, ran a step or two and gave another hop.

"Ah ha! Miss Meow is up to something," I said, only this time under my breath so that the neighbors didn't think I was crazy.

I walked closer, watching the cat pounce around the yard like a furry Slinky. And then I saw it—a little gray mouse not smart enough to stay close to bushes and trees, or to hide. Instead, it had meandered across the dry grass, in plain sight of Miss Meow.

A door slammed behind me and I jumped in surprise. A voice said, "Cindy, why are you standing out here, staring at Miss Meow? Have you been talking to the animals again?"

Turning, I saw my hairstylist standing on the porch, her blow dryer pointed accusingly at me, like a modern day gunslinger about to blow me away. Except she was more like a hairslinger.

My cheeks flushed warm, and I wasn't sure if it was from guilt or the hot sun. Not wanting to admit I'd been talking to the cat, I ignored her, walked onto the porch and gestured toward the feline in question. "She's catching a mouse."

"Yes, but they have a place in the cosmos, in God's great plan for the eternities, with each creature created by a loving Heavenly Father who—"

"They stink up the house!" Mrs. HairSlinger interjected, pinching her nose closed with two fingers. "And they're creepy. They jump and run up your pant legs."

She had a point there, and mice weren't necessarily my favorite, but rather than watch my reputation as Mrs. Doctor Doolittle flushed down the drain, I tried again. "Creepy? Not hardly. What about Mickey Mouse? He's cute."

Mrs. HairSlinger placed her hand on my forehead and mumbled, "She doesn't seem to have a temperature. Maybe the neighbors are right, and she's just plain nuts."

I cocked one eyebrow. "I heard that. Just because I'm an animal lover doesn't make me deaf, you know."

She opened the screen door, and motioned for me to step inside. "You do realize that Mickey Mouse is a cartoon character, right?"

"Humph! Of course I do." I glanced back at Miss Meow, who by now had managed to capture the pitiful creature and was slinking toward the porch with it in her mouth. It gave me the heebie-jeebies. I jumped into the house, Mrs. HairSlinger followed faster than a speeding a bullet, and we slammed the door.

A sly smile crossed her face. "I thought you loved animals?"

"I do, but mice are a little lower on my list, and although I love Mickey Mouse, I have to admit I'm not partial to a wild one running up my leg."

An hour later, with my golden locks trimmed to perfection (yes, I said golden and neither I, nor Miss Clairol, are taking it back), I walked to the front door with Mrs. HairSlinger following. Opening it, I turned to her and jokingly said, "I hope that mouse isn't still out here because—"

A 500-decibel scream from her ripped through my eardrums, and I panicked. Having no clue what the problem was, I didn't know if I should duck and cover, or run. She grabbed my arm in a grip I would have described as vice-like, if it hadn't been for her nails piercing my muscles and coming out through the other side. It made it a little hard to bolt for the car.

She pointed at the welcome mat. There lay the mouse, dead as can be and left for us as a gift, albeit an unwelcomed one, from Miss Meow.

In retrospect, I found it pretty funny—well, after my hearing returned two weeks later—but I'm not so sure Mrs. HairSlinger will ever be the same again.


This blog sponsored by YourLDSNeighborhood.com.


As I knelt on one knee in the damp soil of the flower bed, with the wind blowing my hair so I looked like Medusa—the woman with snakes for hair—I remembered that I'd signed up to give blood. Aaackk!

There was no time to shower and change, so I rushed into the house, washed my face, and then....

"What is that overpowering stench?" I asked Corky Porky Pie, who had just walked into the room. "Is it coming from you or me?" I sniffed my armpits. They smelled like my current deodorant flavor of the day, sweet peas. No, the odor definitely wasn't an arm-pitty smell, but more like wet garden gloves.

"No time to figure it out," I said to the dog, who licked the muddy knees of my pants with enthusiasm. I splashed on a little Ode-de-Perfume, and dashed out the door, ready to donate a quart of my wonderful A+ blood. Or was that A- blood? I wasn't quite sure which, but an A+ was always better than an A- in my book.

Speaking of pluses, minuses, and all those statistical type things, have you ever noticed that when you have a 50-50 choice of entrances, no matter which you choose, it will always be the wrong one? I'm sure there's some sort of Cosmic Rule of Diminishing Doorways insuring that.

After wending my way around the building, I finally found the right place, where an official-looking, blood-sucking lady at the door said, "Your driver's license, please."

My eyebrows shot up in surprise without even asking my permission. "I don't intend to drive the blood anywhere. I thought I'd just let it drip out of my veins into that cute little bag you have hanging there," I said, while fishing out my license.

She checked it carefully, scrutinizing the photo. I'm thinking she wanted to make sure I wasn't a terrorist. Either that, or a burglar in disguise who wanted to rob the blood bank.

Handing my license back, she pointed to a sign on the wall and said, "Please read that."

Was this a blood drive or an eye exam? I started reading each letter on the first five lines:

What? I thought eye charts were supposed to start with the letter E? "Excuse me, but there's something wrong with your eye chart. It doesn't have the right letters."

"It's not an eye chart," she said, looking at me like I needed to give blood in person at the state mental hospital. "It's a list of diseases and symptoms that make you ineligible to donate."

There I was, with my wonderful A+ (or maybe A-) blood, and they might not want it? I read the sign out loud, "Please do not donate if you have a cold, allergy, flu or any of their symptoms."

I was crushed and turned to her. "You mean you don't care if I have AIDS, hepatitis, beri-beri or leprosy? They're not even on the sign. But if I have one small sniffle from an allergy, phhhhtttt ... I'm out the door? My A+ corpuscles and I are rejected?"

The blood-sucker woman's eyes narrowed, and I decided it was time to go. Not wanting anyone to get the wrong idea about my reasons for being rejected, though, I announced to all within hearing, "The Centers for Disease Control need to watch out for allergies, or before you know it, everyone will have them. Right now it might just be drug users and those living alternative life styles that have allergies, but very soon everyone will. If those groups would just practice safe nose blowing, the spread of allergies would be stopped!"

People turned and looked at me with blank expressions. I'm thinking it's because they not only failed the eye exam, but the hearing exam as well. Despite that fact, I continued, "It isn't my fault that I'm the innocent victim of allergies." By now people were moving totally to the other side of the room and whispering. No doubt in pity over my rejection.

"Thank you for your sympathy!" I emphasized my plight by whipping the back of my hand up against my forehead—almost knocking myself out in the process. Heaving a sigh, I proceeded with great dignity and exited out the nearest door ... which turned out to be the entrance.

So much for giving blood. And to think I went to all that trouble to make sure I didn't smell like a wet garden glove. As it turned out, being rejected for the blood drive was the high point of my day, next to seeing this little green snake in the grass while I was weeding. However, I'll save that exciting event for another day because you're probably getting ready to go donate blood yourself.

Just remember not to sneeze while you're there ... and good luck on the eye exam.


This blog sponsored by YourLDSNeighborhood.com.

Although this doesn't contain humor, it's a great video full of patriotism for you to enjoy this July 4 holiday. Have a safe, wonderful celebration!

If you have a second, drop off a comment. What do you think about Rick Monday's actions?