Russ bought a huge bag of M&Ms recently. They're the kind that call to you in your sleep … and when you're in the shower … and when you're working on blogs … and when ... well, you get the idea. I finally succumbed to the alluring siren's song, cradled the bag in my arms and took it in to Russ's office.

I stroked it lovingly, and then, coming to my senses, said to Russ, "I can't keep my New Year's resolution to lose weight if you keep buying candy, especially peanut M&Ms."

"Sorry.” He patted me on the arm and looked contrite, but I wondered if it was really a love pat or something else. Was it a subterfuge and he actually wanted my candy?

Pushing the paranoia aside, I tightened my grip on the bag—just in case. Then reason took over. "If you're going to buy these, at least hide them someplace where I won't find them. Like under the bed." I could feel myself responding just like one of Pavlov’s dogs to the sight of the bright green and red candies on the package and I swallowed hard to keep from drooling.

Russ said, "You want candy put under the bed, with all the dust bunnies?"

Clearing my throat, I stroked the bag again, and surreptitiously tore one little corner open. "No, that was just an example. I want you to not buy them, but when you do buy them, put them out of sight."

He looked at me, confusion evident in his eyes. "Okay, so I'm supposed to buy them and put them where you can’t find them?"

"Yeah, something like that." Then, with a burst of virtuousness, I shoved the bag into his arms and said with a sob, "Quick, hide them!"

Russ lifted one eyebrow. "Are you okay? This isn't exactly life and death here, and certainly not something to cry over. If it's that big a problem, I'll just throw them out." He stood up and leaned toward the trashcan.

Thinking quickly, I grabbed his arm. "No! Not in there. It'll bring bugs if you put candy in the office trash. And besides that, it's against the law and morally wrong. Here, let me take them up to the kitchen."

Russ stopped, moved the candy out of my reach, cocked his head and stared for a minute. "Why are your eyes dilated?"

"Umm, oh ... aaah." I thought long and hard. It would never do to say it was because I’d realized I’d made a mistake in giving him the bag, and was ready to kill if he didn’t hand me back my M&Ms. "Because I just came back from the eye doctor."

Russ looked at the clock on the wall and then at his wrist watch. "It's 10:00 at night. You went to the eye doctor in the dark, when the rest of the world is going to bed?"

"Sure, that’s when he checks his patients’ night vision."

“Who are his patients? Owls?” Russ shifted the M&Ms behind his back, and I sidled closer. Corky Porky Pie, the dog, walked into the room, probably sensing the tension. Either that or smelling the delicious fragrance of chocolate. My chocolate. My chocolate covered, peanut M&Ms that Russ was not going to keep from me.

I lunged for the candy, and Russ pulled a maneuver to rival Jerry Rice. No, not on the dance floor—Jerry Rice on the football field. It did no good, though. Trickery and treachery will beat out speed and agility any time. I stuck out my foot and tripped him. The bag of M&Ms hit the floor. Nothing spilled and I realized the gods were on my side and actually wanted me to eat those chocolate covered peanuts.

Grabbing the candy, I ran up the stairs while tearing the bag open with my teeth. Ha! Nothing could stop me now. No one, no how, no waaayyyyyy—

I tripped over Corky Porky Pie, who had somehow managed to jump in front of me on my rapid ascent up the stairs. M&Ms flew everywhere, and Corky Porky apparently thought it was manna from heaven, as he scrambled with his fat, little legs toward the nearest pile.

They say love can cure anything, and in that instant, I knew it was true. Chocolate is toxic for dogs, and I placed Corky Porky Pie’s safety over my need for a chocolate fix. I grabbed him and held him as Russ swept up the M&Ms—my luscious, lovely M&Ms—and dumped them in the trash.

Afterward, Russ came over, gave me a hug, and told me how proud he was of me. I smiled, and a feeling almost as good as eating chocolate swept over me. I’d done it. I’d saved Corky Porky Pie and sacrificed my M&Ms. I was strong, I was invincible.

And I had five M&Ms stashed in my pocket that no one knew about.


This article sponsored by YourLDSNeighborhood. 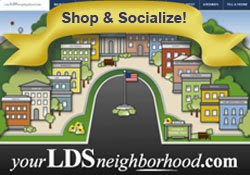 Hilarious, absolutely hilarious. Keep those laughs and giggles coming in.

Those 5 m&m's should get you through this tough period of willpower, er, or lack thereof. LOL

Glad you saved Corky Porky Pie, although I'm sure he didn't quite see it that way. :-)

An Apple a Day...Early Bird Gets the Worm...Chocolate in my Pocket--All wise words to live by.

Enjoy your authors dinner. I thought semi-formal was tucking your shirt in.

I'm so glad you saved Corky Porky Pie. You are definetly the heroine of the day.

I would've loved to see the scene! To add a little romance to it, I pictured you dancing a Tango with Russ. ;(

I love M&M's too, especially now that they have dark chocolate. What puzzles me is why to they have to grow on my hips? =(

Cathy: Thanks for stopping by and commenting. Yup, whenever there are M&Ms present, there's always bound to be chocolate subterfuge. :)

Rosa: So nice to hear from you. I never thought of doing the Tango ... that would've been a great way to get the M&Ms back from him. :)

Connie: Oh yes, we couldn't let anything happen to Corky Porky Pie, could we? :)

Thanks for stopping by, reading and leaving a comment.

Heeehehe, you sneaky little booger you! I'm sayin...Hubby brought me in a Reeses Peanutbutter cup Saturday. This Ozarks farm chick didn't even hesitate just snatched it up, slowly ate and enjoyed it and called it lunch! Heehehehe!

From the sunny hills and hollers of the Missouri Ponderosa, ya'll have a wonderfully blessed day!!!

Jen: Flirty, huh? Well, that's the first time my site has ever been called that ... but I think I kinda like it! :)

Ooo, peanut butter cups are almost as good as M&Ms! Smart thinking to snatch it up right away! :)

haha I loved this!!! It put a smile on my face and made me laugh out loud. Very cute and I like your writing style, very smooth and quirky.

M&M's are the loudest sirens around. Even my daughter cannot withstand the allure of their call. I know one say there is going to be a war over m&m rights.

Do you find you get more comments when you are discussing chocolate!?!

Thanks for the laugh today!

TJ: Glad you enjoyed visiting. Thanks for the kind words about my writing style. (I like "quirky." It's much better than some other things I've been called! :)

Please come back and visit anytime!

Amber: Oh yes, I can easily see a war over M&Ms. They must be the ambrosia the Greek gods ate, huh? :)

Triple Nickel: Oh, I got a good laugh out of your response! You must be an M&M man at heart.

Or maybe you're a lady? It's really hard to tell from your profile picture! :)

Valerie: You brought up a very interesting point. I think you're right, there are a lot more comments when discussing chocolate. I wonder if it's the same when discussing Twinkies? :)

When you describe yourself holding the bag and stroking it, I pictured Gollum. Crouched, smiling, and saying, "My Preciousssss."

I'm so proud of you for your sacrifice. You gave up all that chocolate to save Corky Porky Pie? What a mama!

If you're desperate, I'll smuggle five more M&M's to you when I see you next week.

Congratulations on being featured in the newsletter!

You are a girl of my own heart! I had a hard time reading this to my husband through the tears and giggles. This is an exact description from a scene in my life. :)

That was so funny. I could just see it! Hope you enjoyed those M&M's. :)

Okay, I know the blog was about the sacred nectar of M&M's but there was something else pulling at me.

When you call your dog do call "Come here Corky Porky Pie." Do you say his whole name every time and do the other dogs like Spike and Snarl tease him?