Giblets Roasting on an Open Fire ... by C.L. Beck 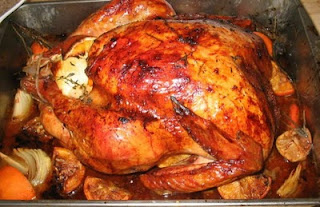 Ahhh, Thanksgiving—that time of year to eat roast turkey, smashed taters and stuffing. There’s only one way to make the stuffing and that's with sour dough bread and giblets. Okay, I hear some of you gagging at the mention of giblets, but mine is an old family recipe that tastes great. Otherwise, I wouldn’t be caught dead touching a giblet.

We have time honored traditions in our home and we follow them to the letter. One year, however, it didn’t go quite as expected. We watched the Macy’s parade in the morning while the giblets simmered on the stove. Then I turned them off (the giblets, not Macys), and made the stuffing using ... well ... I won’t tell you which parts, because you'll start gagging again.

I will say I’m picky about which innards go into my stuffing and there’s no way that gristly, ghastly gizzard was included. I left it in the pan of water and turned it back on so it would cook more, with the intention of feeding it later to the cats. Then I stuffed the gobbler and got that baby roasting.

While it cooked, we jumped into our truck and headed up the canyon to go skiing. I could almost catch a whiff of roast turkey floating among the pines, as the clouds threw dancing shadows that resembled pumpkin pies, and the snow looked like mounds of whipped cream.

After a couple of hours, it was time to go. On the drive down my tumbly was rumbly, thinking of the turkey that would be ready at home. My favorite Thanksgiving moment always happened when I walked in the door and the warmth of the kitchen washed over me, while the pungent odor of sage, onions and roast turkey wrapped me in a culinary hug.

I was the first to bail out of the truck, and raced to the door anticipating the aroma. I stopped short with my hand on the knob. “What’s that weird noise?”

My husband, Russ—being deaf in one ear and not able to hear out of the other—said, “What noise?”

“It sounds like a high-pitched whine.” Puzzled but not concerned, I turned the key in the lock and opened the door, inhaling to my fullest in preparation for the wonderful smells to come.

Acrid smoke poured out and rushed up my nose, while the smoke detector screamed like a wild banshee. “What’s going on?” I yelled to Russ over the din, waving my hands to clear a path through the smoke.

“But what?” Had the turkey exploded and plastered itself all over the oven?

Just then our son, Dave, walked in and said, “Hey, something’s burning!”

Our family has a talent for stating the obvious.

By now, we were almost deaf. Apparently, it never occurred to fire alert manufacturers that some people might not dash out the door, but instead would stand around discussing what’s on fire.

What happened next should have qualified me as a firefighter of the tenth degree. I didn't waste my time looking for unnecessary equipment, like a fire extinguisher. Instead, I took decisive action, grabbed a dishtowel and flapped it frantically under the detector to clear the sensors and shut it up, while Russ dashed to the oven to pull out the turkey. Dave stood in the doorway, waving the door to clear the air, and cheered us on in between coughs.

Russ yelled at the top of his lungs, “It’s not the turkey. It’s something on the stove ..." He paused, inspecting the blackened pan. "It looks like a cremated gizzard!” Naturally, the smoke detector quite screaming just then, so that even strangers on the streets of Provo knew we had giblets roasting on an open fire.

Despite the fiasco of a holiday where our house smelled of burned gizzard—and we ate bundled in coats because the doors were opened to air out the smoke—it was a Thanksgiving to remember. Our son, now thirty-something, loves to tell the story to anyone who will listen.

Some might think it foolish to tempt fate, but I’ve cooked giblets every Thanksgiving since. A tradition such as that can’t be tossed out the window just because of a tiny mistake like an incinerated innard. Besides, I’ve learned from the error of my ways and now take precautions.

The night before Thanksgiving, I pull the battery out of the smoke detector.

This blog sponsored by YourLDSNeighborhood.com. Please show your appreciation by stopping for a visit. And take a minute to check out their newsletter, and yourLDSRadio as well!

I love Thanksgiving! That's quite an awesome looking bird. I'm keeping my fingers crossed that mine will look as nice.

It's always a great day when the house doesn't burn down. :)

We state the obvious here as well. Sounds like a holiday to remember...

Gibblets roasting on an open fire! So very funny! Thanks for the fun memory and I am glad your house didn't burn down, too.

We've already done the Canadian one and we're gearing up for round two.
My biggest Thanksgiving faux pas was doubling the sage when I made stuffing one year. It looked like something out of 'Green Eggs and Ham". It would have worked for St. Patrick's Day, or maybe April Fools.

Did you see the video of the husband who stuffed a little cornish hen inside a turkey before his wife cooked it?
After she cooked it they all stood around and gawked at the bird as the husband removed the hen.
"Honey! There's a baby turkey in here!"
The wife couldn't believe she'd killed a mommy turkey.
It took a while before they family was able to convince her that the turkey they were eating is a male.

Oh my, that is funny Cindy... but on a more serious note, so glad the house didn't burn down. :-) I'll probably be working every day leading up to and including Thanksgiving and even the days after, so hubby will be in charge of dinner preparations. I have every confidence he'll do swell.

Sounds like you had "smoked" turkey! :-) Bet it took a long time for the smell to go away.
Thanks for a fun blog ~ as always!!

Right. Are you otherwise known as Dorothy Gale?