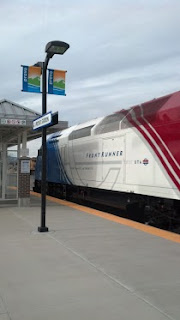 Not long ago, we had the opportunity to catch the RideUTA FrontRunner train on its maiden voyage from Provo to Salt Lake City, UT.

At any rate, it was a fun ride. Smooth, and not at all herky-jerky like my first train ride of yesteryear in New York City.

Oh, all right. Picky, picky. That train ride in NYC was more like yester-century. There was probably a steam engine on that one.

But, back to the RideUTA FrontRunner. Here's an interesting fact: the train can only go up to 79 mph. We were told it has a device -- a governator -- to prevent it from going any faster.

I'm not quite sure what a governator does, except maybe retire from California politics and drive a train. And yet, I never actually saw Arnold Swarzeneggar sitting there, running the locomotive.

So, maybe I'll just say it had a thinga-ma-jiggy that prevented it from going faster than a speeding bullet.

All of which brings me down to this. The other day I was thinking about the experience and a joke came to mind:

A slightly tipsy hobo and his teetotaling friend are sitting at the station in Salt Lake City, hoping to hitch a ride unnoticed. The first one staggers, catches his balance, and says, "The world is changing, old buddy. Did you notice that none of these trains have a caboose?"

The second one says, "Yup, you're right. No cabooses. Probably because we're at the bus station."

How about you? Have you ever ridden on a train? And was it as sleek and sassy as the RideUTA FrontRunner?

-----
A Small Plug: If you enjoyed this semi-witty humor article,  then sign up for my newsletter in the sidebar on the right. That way you won't miss out on future fun.